GroomingBoardingPuppies
Thank you! Your submission has been received!
Oops! Something went wrong while submitting the form. 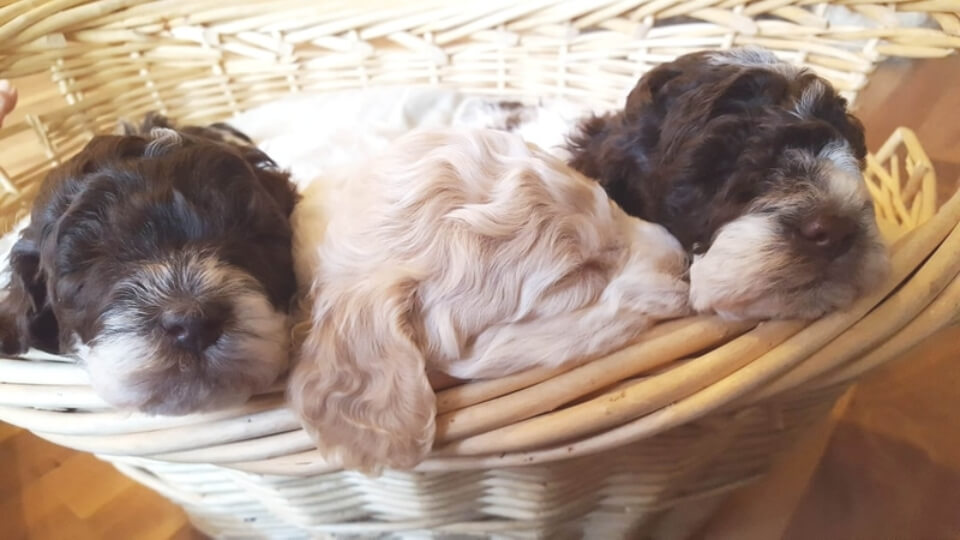 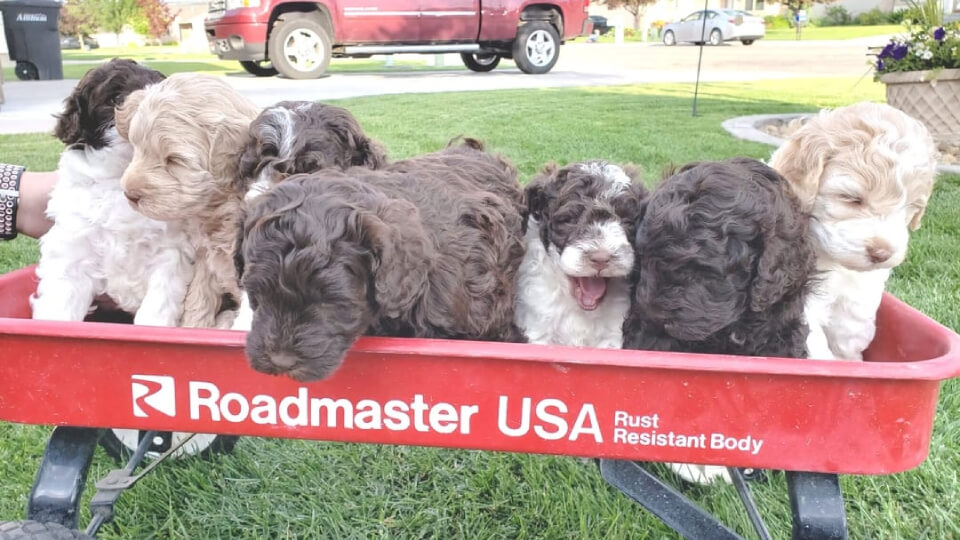 Sign up using our simple form to reserve your spot in line.


We recommend doing this sooner, rather than later. If you're looking for a puppy later down the line, we'll be able to accommodate that. However, if you wait until later, those that came first will get priority.
Step 2:

After the form, we can hop on the phone and discuss you and your family's needs & preferences.

Each puppy is selected for placement based off of what type of puppy you want. This phone call will help us give you the best puppy for you.

After our call, we'll need a small $600 deposit from you to solidify you on the list.

Most people can pay with a credit card number over the phone, or filling out a form on the website. After that deposit, you've saved your spot in line!
‍
Step 4:

After the puppies are born, we'll send you an email with an update on their condition.

We'll provide info on the entire litter, the differences that we notice in each dog as they develop, and how everybody is doing and who we think you'll enjoy the most.
Step 5:

Adoption day is a wonderful day!

We hope that you've had a chance to stop by a couple of times before this and bond with the puppies, so it shouldn't be your first time meeting them.

However, it's still a wonderful day to know they are coming home with you!

You'll be able to pick up your little one (or have us drive to you for a fee), receive your kennel and take-home kit, and finally have your puppy become a part of your family!
Sign Up &
Get Started

Is An Australian Labradoodle Puppy Right For Me? 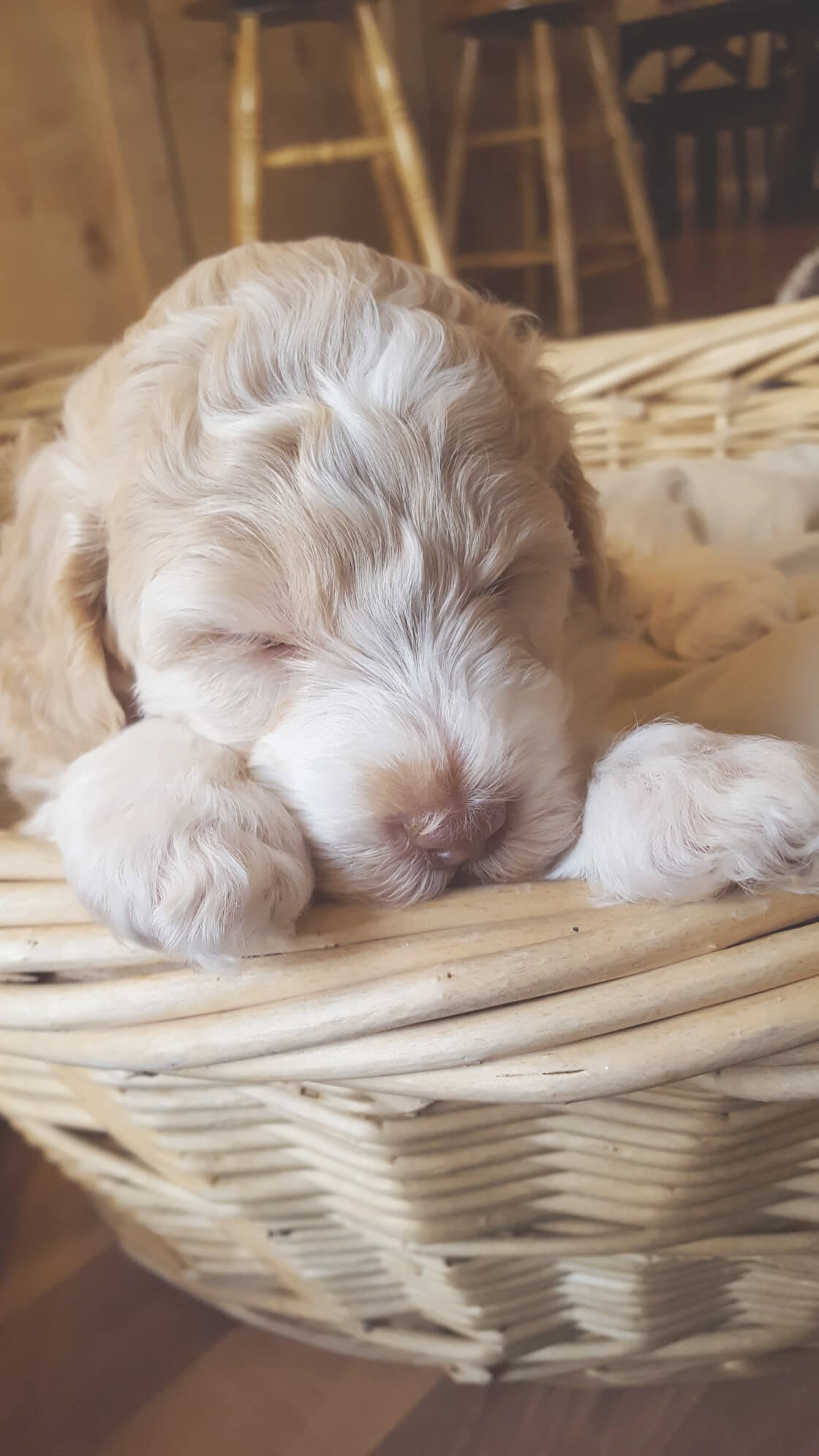 They are typically not very aggressive, and are great with kids.

If you're looking for a stereotypical, masculine "REAL" dog that plays fetch 24/7 and is highly coordinated, that will be able to keep up with roughhousing with teenagers, this breed may not be for you.

Many breeds of dog are loyal, but Australian Labradoodles are especially so.

They are a great family dog, checks up on the well being of small children, and will love you to the ends of the earth.

They maintain eye contact with humans very well. Assuming you keep their hair groomed, you'll be able to see their eyes too!

Australian Labradoodles have a high desire to please their families.

They are very sensitive to displeasing their masters, so a lighter hand tends to work better than a heavier one.

This, combined with their high intelligence, makes them an excellent dog for beginners.

They are also great for grumpy husbands that don't want a dog. That's how I managed to convince my husband, and my scheme worked wonderfully on him! 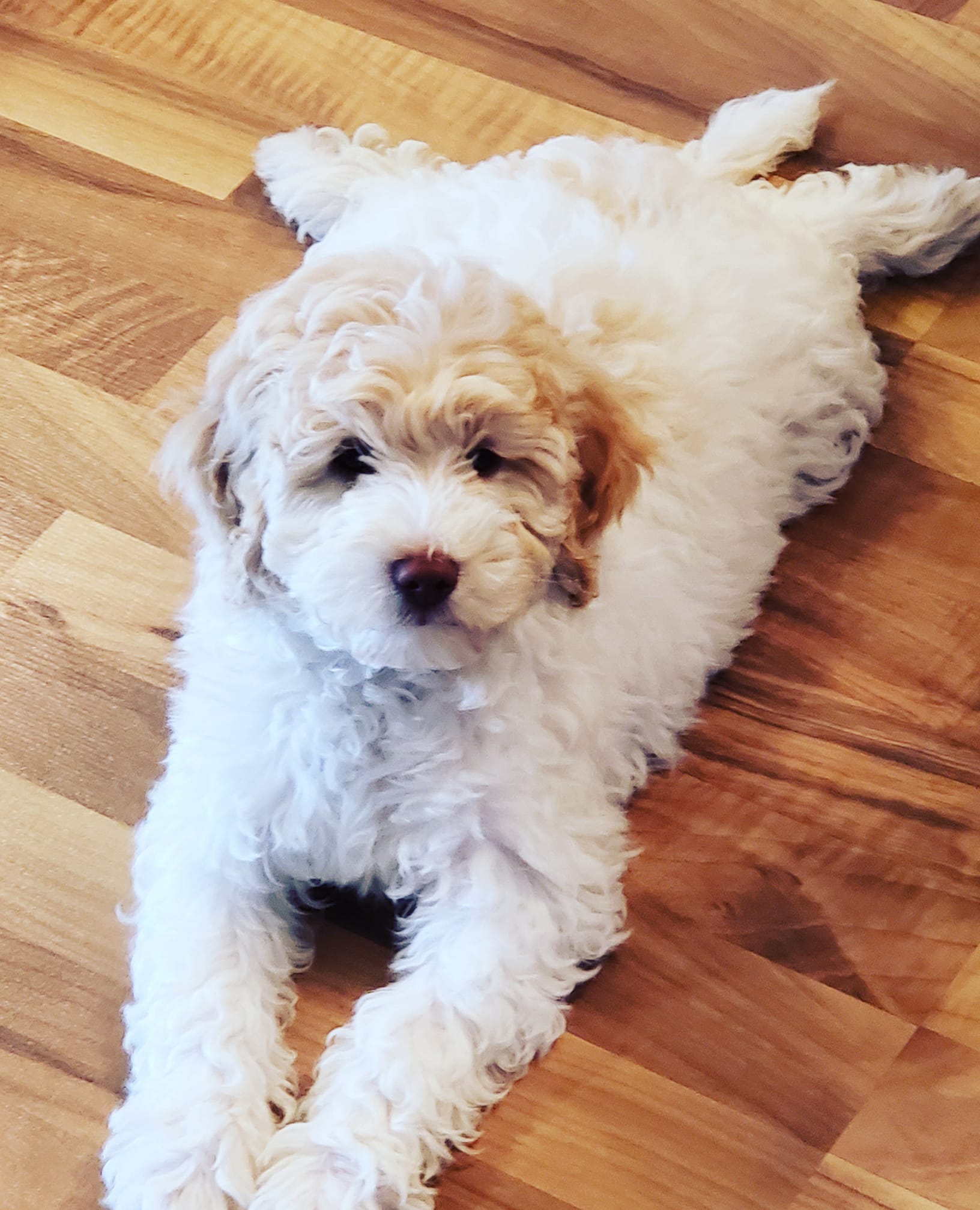 They share a lot of traits, but the main difference is the fact that Cocker Spaniel is added into the mix, changing their temperament and energy levels significantly.

Aussie Doodles require a lot more attention and exercise, as their a cross between two working dogs. They can become destructive if they are not given enough exercise.

The addition of Cocker Spaniel into the mix makes Australian Labradoodles significantly easier to care for. They don't require as much exercise, they tend to be more people oriented, and have a stronger desire to please their families.

Unfortunately, some people that get Doodles are under the impression that because they don't shed, they don't need o go to the groomer or get hair cuts.

This is very far from the truth.

Australian Labradoodles (like most Doodles) require regular maintenance. It's advised that you groom them every 6 weeks. 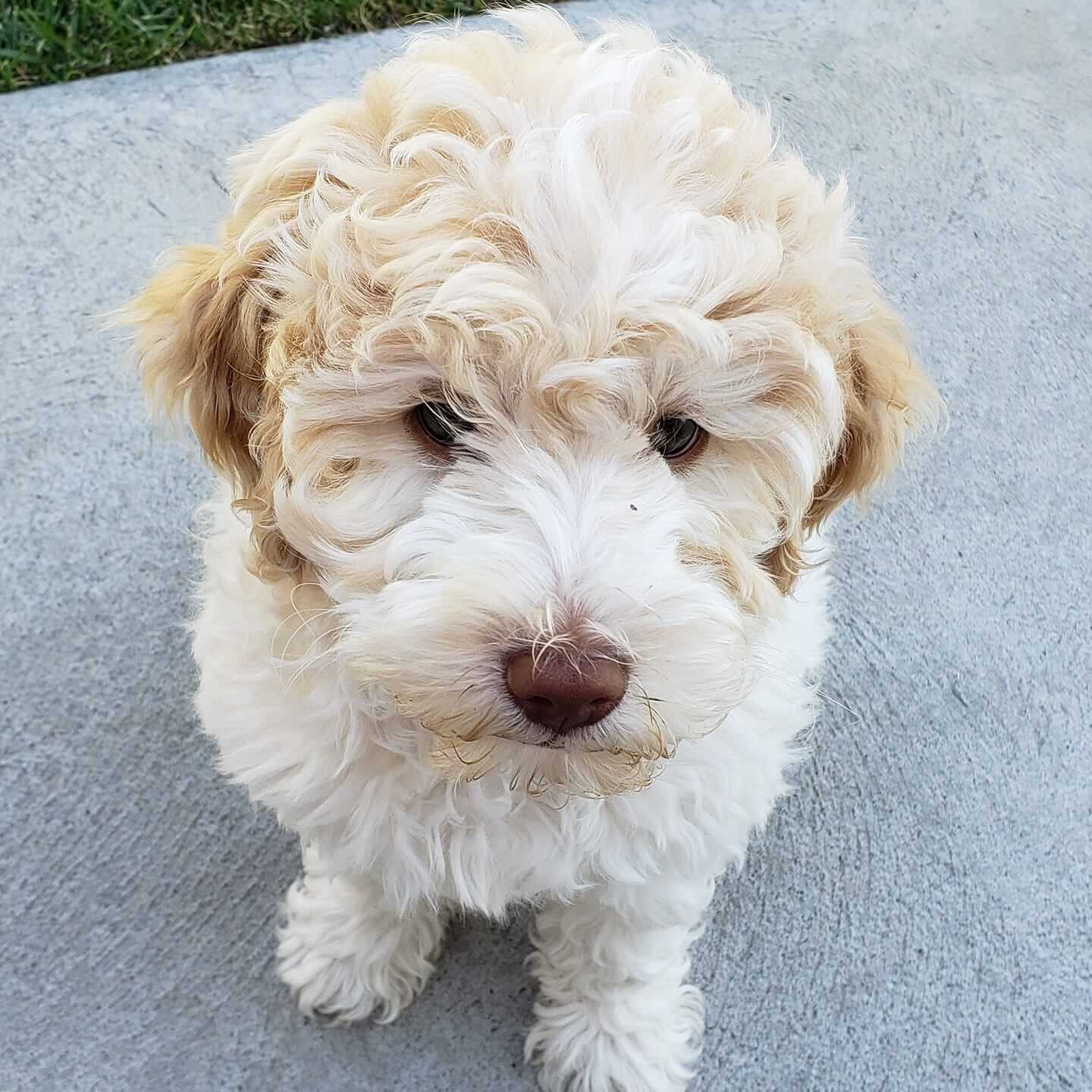 Australian Labradoodles have an average lifespan of 12-14 years.

Providing your Australians Labradoodle with adequate playtime (30-60 minutes) either by walking or playing in a safe backyard can maximize the time you get with your little one.

Good quality food and mental stimulation have also been found in increase lifespan.

Ash, our breeding dog (more to come in 2024) has curly hair, a black coat, and a very mellow temperament. Great for families that are seeking a dog that enjoys companionship, but doesn't spend all of their time demanding your attention.

We are seeking a stud that has similar temperament and personality traits, but a different coat color to add some color variety.

The photos you see here are of Ash and her litter mates. You can see the wide variety of colors you can expect from our Australian Labradoodle.

Australian Labradoodles are a cross breed with Australian Shepard, Poodle, and Cocker Spaniel.

They're known for their mellow temperament, high intelligence, and their natural tendency to bond with people. They maintain exceptional eye contact, and have a very strong desire to please their families.

Australian Labradoodles are a mixed designer breed. They are relatively new, beginning in the 1980s.

However, the three breeds that they come from, the Australian Shepard, the Poodle, and the Cocker Spaniel, are not new. They both have long established histories.

The Australian Shepard is a well-known herding dog that are highly intelligent.

Cocker Spaniels have a long, but not super well-documented, history. It's commonly assumed that they came from Spain in the 14th century, but were used in Britain and the US as hunting dogs.
‍
Australian Labradoodles have combined the characteristics of these three breeds to produce happy, social, an well-tempered dogs that are perfect for families.
‍ 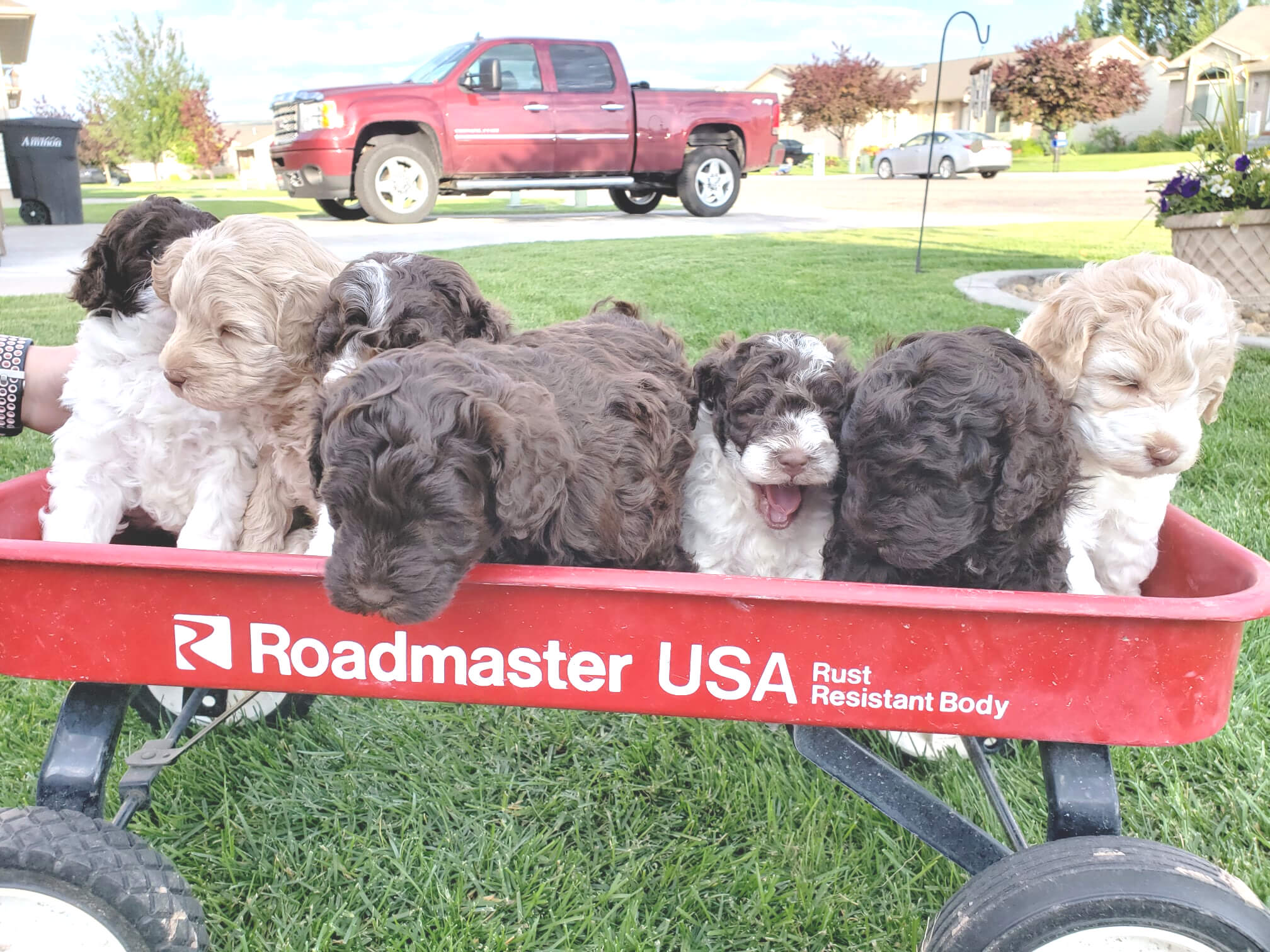 Australian Labradoodles can range wildly in size. They range from 25-70 pounds normally.

However, the Happy Home Australian Labradoodles are around 35 lbs. This allows a medium-sized dog that's perfect for home living, while avoiding some of the health problems that small dogs can have.

Australian Labradoodles that are well taken care of often live healthy lives that are free of chronic pain.

Because they are a hybrid, mixed, designer breed, they don't suffer from many diseases that would typically plague some purebreds.

There are only three things that we suggest looking out for. You will want to watch out for some of the following things, typically when they reach an advanced age:

It's a good idea to have the doctor check your Australian Labradoodle's hips and elbows, as they can often predict the likelihood based on their bone structure.

Happy Home Australian Labradoodles are checked by a vet beforehand for these problems.

Australian Labradoodles can be affected by progressive retinal atrophy (PRA) and multifocal retinal dysplasia. These aren't common, but can lead to vision loss.

Von Willebrand's Disease is a bleeding disorder that can affect Australian Labradoodles.

If you buy Australian Labradoodles from another breeder, make sure that they test for this. 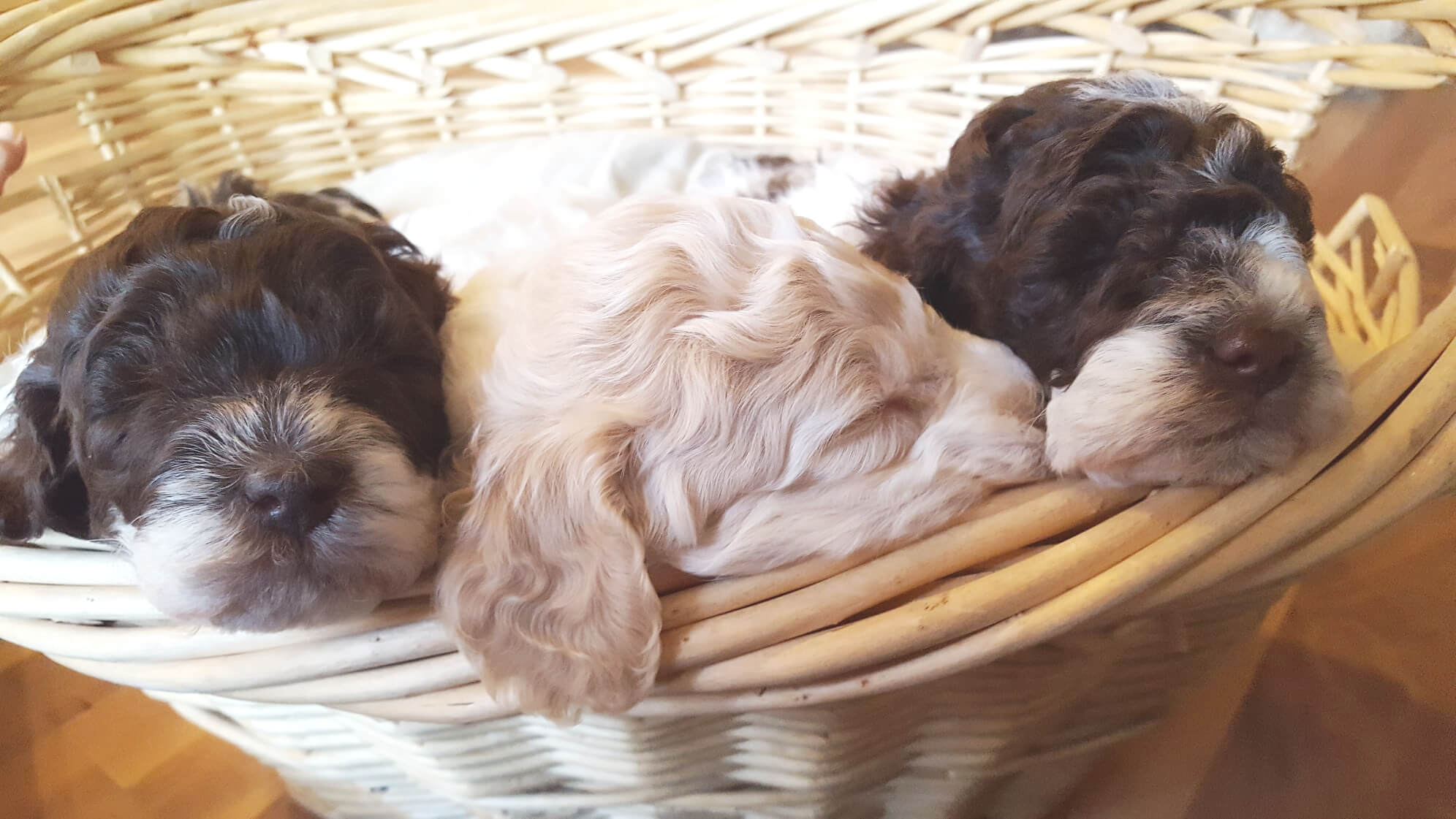 Grooming is vital for Australian Labradoodles.

Failure to groom your dog regularly can lead to matting, an excess of dandruff, difficulty seeing through their hair, and health problems.

Australian Labradoodles need to be groomed and cut every 6 weeks. It's also recommended to regularly brush them (we brush 4-5 times per week).

Australian Labradoodle coats are often described as "teddy bear like". Their coats tend to fall into one of two different categories:

Fleece-textured coats are soft, and can range from straight to wavy hair (often having variations within the same litter).

Australian Labradoodles often have a wide variety of colors in a single litter. Most common colors include:

Get On The Waitlist